Do you "settle" for less?

for "not what I was expecting"?

I have been known to "make do" much longer than I should have - and therefore - "settling".

It actually pisses me off.

WHY DID I DO THAT?

You don't have to make excuses.

You don't have to create a litany of reasons why.

You just do not have to settle.  Period.

Your castle,  your rules.

So often, we feel as if we HAVE to take that job,  HAVE to audition for that show or project,  HAVE to, have to, have to.

What if I told you,  having to leads to settling?

What if I told you settling leads to mediocrity?

What if I told you mediocrity leads to your soul being sucked away?

What if I told you,  that if you were GIVING the advice,  you'd tell that person "settling" the exact same thing????

What are you settling for, anyway?

You haven't worked in a while so you SHOULD take that job?

You need to get another credit on your resume,  so you SHOULD audition for something that really isn't your fach, your wheelhouse, your type?

You should just take that job, even though the pay sucks, and the living conditions are like a 3rd world country...because...

I know a secret I want to share with you....

Theatre isn't going anywhere.  It has been here since ancient times, and will outlast all of us.  It is not going ANYWHERE.

We so often get so panic-stricken about work,  about being seen,  about staying current.  Yet, by settling,  what does it really reveal about us?

Could it be anxiousness?

Could it be fear?

Could it be panic?

Could it be desperation????

I don't know about you,  but I don't particularly want anybody to see ANY of that.  EVER.

And frankly,  why should they even be part of my or your consciousness?

Who told us we had to be anxious or fearful or desperate?

Those stupid inside voices that need to be silenced quickly,  that's who!

Even the business doesn't say that.  They WANT to hire us if we are right.  However, if we bring in desperation or fear or anxiousness,  they cannot.  They need us to be grounded, and real, and clear, and focused & all those things we know we can be.

While teaching, I often talk to the singer while they are singing - not because I don't think they are doing what I am asking of them,  but rather to remind the subconscious of what we are DOING.  And I often say,  I need to be the LOUDEST VOICE IN YOUR HEAD.

Who is the loudest voice in YOUR head?

Those voices need to push you when you hit your snooze button but you need to get to that audition.

Those voices need to push you when you need to self-submit online BEFORE you have an adult beverage,  or a date, or a snuggle on the couch with your pet.

Those voices need to push you when you'd rather eat pie than go to the gym.

If you DO ignore them and settle - trust me - they will KICK YOUR ASS.  HARD.

It takes more effort and work and energy to try to shut them up than it is to actually DO what is right for you.

Why do we fight it?

Why do we settle?

I have two words for you:  STOP THAT.

Or three words:  STOP THAT STUFF.

Figure out if settling is serving you,  or if it is simply wasting time and energy keeping you from the power and possibility that is yours.

POWER & POSSIBILITY is stronger than "settling".

The focus is never ahead of you - but always in your peripheral vision.  Stay alert.  What lurks there is precisely what you need to see in order to never settle.

Not settling means saying "thanks, but no."

Not settling means saying "I am better than that."

Not settling means saying "I deserve better than that."

From the people you surround yourself with.

From everything that you feel informs you,  involves you & infuses you.

Here's your line in the sand.

Saying "no" doesn't mean a door closes or a bridge burns.  Saying "no, I am not settling" means possibilities begin to percolate and build;  You just have to have the courage to say it and walk away.

You don't walk away with your head down, in defeat.

You walk away with your head held high,  paying attention to each moment with your focus in the periphery!!! 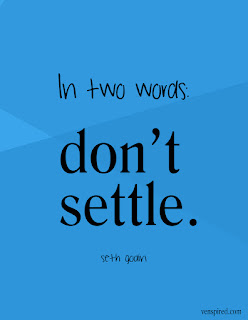 We launched the website TODAY!  WE ARE LIVE!!!!! sign up for updates, and you will get the info about new blog posts from that platform!...

All posts and personal photographs are copyright 2009/10, 2011/12, 2013, Susan Eichhorn Young. All rights reserved. Content may not be reproduced in any fashion without written permission from the copyright holder.